The Online Services portal will not be available from this Friday 27 May 2022. It will be available again from 9am on Sunday 29 May 2022. We apologise for any inconvenience caused.

Council is committed to maximising the benefits and minimising the impacts of the airport for Penrith residents.

Western Sydney Airport has the capacity to unlock exciting opportunities for Penrith, providing more local jobs, increased industry, investment and infrastructure, and opening up our City to Australia and the world.

Council is working to harness the opportunities the airport brings and will continue to advocate for better roads, transport, employment and infrastructure to ensure Penrith benefits from Australia’s most exciting major development in decades.

To realise this potential, we have identified several priority issues and the action required to maximise the benefits and minimise the impacts of the airport for the people of Penrith.

A SEAT AT THE TABLE Penrith Council is part of the Western Sydney City Deal and Penrith Mayor Ross Fowler OAM is a member of the Forum On Western Sydney Airport (FOWSA) ensuring the voice of our community is heard on the planning of the airport and surrounding areas.

CONNECTIONS - ROADS AND TRAINS The Western Sydney City Deal outlines a commitment from the State and Federal Governments to deliver the first stage of the North South Rail Link from St Marys to Western Sydney Airport in time for the airport’s opening in 2026. Council will continue working to ensure adequate funding for this project and to secure the future extension of the line, linking Campbelltown to Marsden Park.

LOOKING AFTER OUR HEALTH & ENVIRONMENT All environmental and social impacts must be fully addressed and managed in any approvals to ensure the health and wellbeing of our community is maintained.

SHOW US THE JOBS & BUILD OUR ECONOMY The airport should be the catalyst to create the number and type of jobs our community wants and drive economic development in Western Sydney.

KNOWLEDGE + SKILLS = OPPORTUNITIES Centres for learning, education and research should be established in Western Sydney to equip our community with the skills they need to aim high and succeed in jobs of the future.

AN AIRPORT OF THE 21ST CENTURY We see Western Sydney Airport as an iconic site that delivers world’s best practice in access, employment and technology.

Council’s position and advocacy has been unwavering.

It is vital these opportunities are realised from the airport, so we've been actively speaking to Federal, State and other local Government representatives about the community’s key priorities.

Western Sydney Airport - Maximising benefits and minimising impacts defines our position on the airport and sets out a clear and concise program of advocacy which the community can be assured we will focus on. Our campaign around these issues will be wide reaching and include direct contact with decision makers and politicians. For maximum impact, we need the community speaking with the same voice. 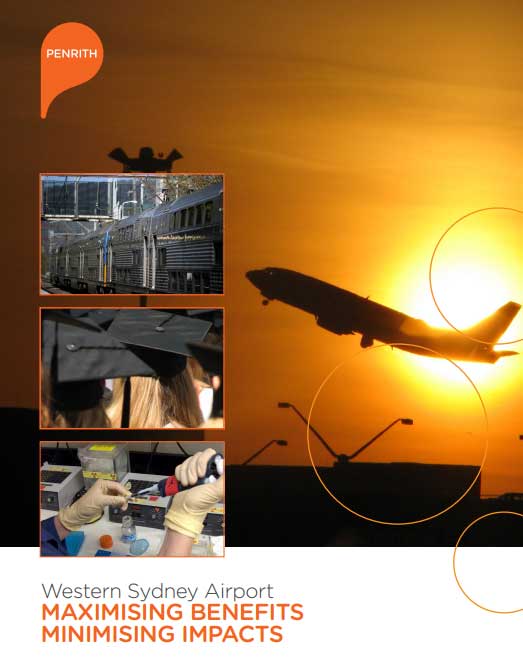 We have compiled a series of frequently asked questions about the airport and Council's position.

Leading airport designers will team up with university students with a link to Western Sydney to pitch for a chance to design Western Sydney Airport's terminal.

The estimated 200,000 jobs boost for Western Sydney-made possible by Western Sydney Airport-is a step closer today with the appointment of the master plan architects for the Airport's business park.

The first concept design of the Western Sydney Airport visitor centre has today been revealed following the awarding of the construction contract.

The second issue of the 2018 Community Update for Western Sydney Airport includes the latest information on the airport project's development.

The first issue of the 2018 Community Update for Western Sydney Airport includes information on completed and upcoming work at the airport site, the appointment of the CEO for WSA Co, and how Aboriginal cultural heritage is being protected. It also includes the latest on current business opportunities and information on the Australian Government’s commitment to maintaining the biodiversity of Western Sydney.

To maximise job opportunities WSA Co will formally commit to strong local employment targets. From 2026 when the airport is fully operational, WSA Co will have a target that 50 per cent of employees will be residents of Western Sydney. There will be a separate target that 30 per cent of workers are residents of Western Sydney during the construction phase.

Penrith residents are set to benefit from significant investment in the region as Penrith Council secures funding for local projects through the Western Sydney City Deal.

Having grown up in Western Sydney, Mr Millett brings both local knowledge and more than 20 years’ experience managing complex operations across the aviation and infrastructure sectors in senior executive roles in Australia, the United States, Europe and Asia.

The early design of the M12 Motorway—which will provide first rate connectivity to Western Sydney Airport and a new motorway connection to rapidly growing areas of Western Sydney—has been unveiled.

The last remaining building has been cleared from the Western Sydney Airport site, meaning the 1,780-hectare Badgerys Creek site is now a construction zone with preparatory works currently underway—ready for early stage earthworks to commence before the end of 2018.

Work has also begun to relocate 3.2 kilometres of an aboveground high-voltage power line that crosses the site to an underground cable route.

The Federal Government has appointed three further Directors to the Board of WSA Co: Mr Vince Graham AM, Ms Anthea Hammon and Mr John Weber.

Minister for Urban Infrastructure, Paul Fletcher has announced that WSA Co will be headquartered in Liverpool.

WSA Co, the new company responsible for constructing Western Sydney Airport, is now officially up and running. An independent Board has been established, and the first four directors have been appointed to drive the construction of Australia’s newest airport. Find out more about WSA Co at wsaco.com.au.

On 9 May 2017, the Federal Government announced that it will establish a company, to be called WSA Co, to develop and operate Western Sydney Airport. The 2017 Budget includes a commitment of up to $5.3 billion over 10 years for WSA Co to build the airport.

FOWSA met for the first time on Friday 26 May, and toured the Western Sydney Airport (WSA) site.

Further information on Western Sydney Airport and its development is provided by the Federal Government: