On Tuesday 18 of July 1871, Penrith Council met for the first time. The meeting was chaired by the elected mayor, James J Riley, and there were eight elected aldermen present. This year marks 150 years since this historic beginning.

Penrith holds a unique place in the world: where a global city meets rugged mountains at a mighty river. Our lifestyle is second-to-none. We embody innovation and economic momentum; yet at the same time, we value our wide-open spaces and access to nature. We embrace everything this lucky country has to offer us.

The lands we call home have seen agricultural pastures for animals, a penal colony, a vast factory producing ammunition for far-flung wars; these lands have been sacred country for the Dharug people for thousands of years. Our City has been home to convicts, who were deported from England and incarcerated at Emu Plains, then made to work in iron-gangs to build the treacherous Zig Zag Road, now known as Old Bathurst Road. Even female convicts were incarcerated at Emu Plains.

There have been many firsts: the first successful expedition by European settlers to cross the Blue Mountains set off from South Creek in Orchard Hills in 1813. The first notable bushranger gang became active around Penrith and neighbouring districts: John Donohue and his gang of bushrangers terrorised our area until he was finally shot by a soldier in 1830.

Its location in this pivotal position on the Western Road ensured that Penrith City became instrumental in the history of NSW. It was the construction of the mighty Victoria Bridge, which we still use today, that allowed for the gold fields west of the Great Dividing Range to open. As the gold rush unfolded, the amount of traffic into and through Penrith increased exponentially, with hoards of hopeful miners travelling west to try their luck, and many inns, hotels, shops and services springing up to cater to them.

The coming of the railway and Penrith station in the late 1860s were inextricably linked with our district’s development. As the area grew in economic importance, the desire for local government began to stir. It took many petitions from local landowners and residents expressing their desire for a voice in matters affecting them – along with many counter petitions arguing against it – until, on 12 May 1871, the district of Penrith was proclaimed a municipality, announced in the NSW Government Gazette the following day. The population of the Penrith township at that time was 836.

At the time only men could be elected to Council, and once elected they were called aldermen. The first Mayor was J.J. Riley, a prominent man who lived on a 2,000 acre property at Mulgoa where he bred fine sheep and thoroughbred horses, who served as a local magistrate for over 30 years. Among the other eight aldermen were a local butcher, two publicans – one of whom built the Red Cow Inn – a storekeeper, an Irish farmer and a bootmaker. The local undertaker was appointed clerk.

They set about building the frameworks of a local government, passing bylaws and introducing improvements to increase public safety, health and wellbeing. At the time there were very few well-formed roads in our district, so installing kerbs and guttering was one of Council's first tasks. They negotiated to receive half the funds from the toll over the Victoria Bridge. And more bridges, drains and culverts were put in place to deal with the drainage problems that plagued the district, which often led to life or death situations.

“Cleanliness combined with good drainage is one of the best preventatives,” as written by The Nepean Times in 1884. Outbreaks of diseases like typhoid, diphtheria and scarlet fever were often deadly, particularly in the lower lying areas, and more so when residents would leave rubbish in holes and gutters. Sanitary conditions would rapidly improve once Council enacted a series of bylaws to address these problems.

There is a long lineage of innovation in our City: in 1890, Penrith became the first town in the Sydney Region to connect to electricity. With much fanfare, Penrith switched on street lights and made electricity available in private homes, only the third town in NSW to do so after Tamworth and Young.

In the early 1920s, when residents were still burying or burning their household rubbish in the backyards, Council introduced a regular garbage collection service. Waste was taken to a former garbage tip within Penrith Park, and used to build up low-lying grounds. The inspiration for this came from Sydney’s Centennial Park, which also used rubbish to build up lower areas. This new garbage removal service improved air quality and the health of residents.

Council has always been a strong supporter of sports in our district, championing the establishment of Nepean Rowing Club in 1928. Council’s donation of 15 pounds for the establishment of the club caused a stir at the time, leading one alderman to quit in protest, but Council argued that nothing could bring crowds to our River like rowing could.

Over time, Penrith and our neighbours joined together: in 1949, St Marys, Castlereagh and part of the Nepean Shire amalgamated, joined in 1963 by Emu Plains and Emu Heights. As Penrith expanded, our sense of civic pride grew too – a perfect example of this was the centenary celebrations in 1971.

The 100th anniversary of the municipality of Penrith was honoured with City-wide fanfare, the likes of which we don’t see anymore. To kick things off, the Mayor fired a pistol into the air. A procession of floats representing 120 local organisations paraded through the streets of St Marys and Penrith. A ball was held at Penrith Leagues Club , plus an elegant garden party took place at the beautiful Combewood homestead. An aquatic carnival on the Nepean River featured canoe races and a demonstration by ‘kite-man’ who flew above the water. The Nepean District Tennis Association set a new world record for endurance tennis, with a single game lasting for 50 hours. A picnic day at Penrith Showground featured amusement rides, novelty races and a parachute jumper. As the celebrations continued, crowds flocked to art exhibitions, concerts, a flower show, BBQs and fireworks displays. A banner commemorating 100 years was displayed on the front façade of the Council Chambers, which inspired the banner hanging above the entrance to the Civic Centre today.

As we look ahead to the next 150 years – in which Penrith will become a global City in our own right, with world-class parks, well-connected employment hubs and a quality of life second to none – we acknowledge the achievements of our past and of the people whose shoulders we stand on.

Take a journey back in time as local historians and enthusiasts shed light on the history of the Penrith LGA as part of a speaker series held in celebration of 150 Years of Penrith City Council 1871–2021.

Lorraine Stacker: A History of Penrith and Penrith City Council

Former Penrith City Council historian and research librarian Lorraine Stacker wrote the book on Penrith’s history – literally. Hear some of the stories that shaped our LGA from Penrith’s leading historian – how convicts snuck across the Nepean River from Emu Plains to trade with Penrith folk, who paid (and didn’t pay rates) in the early days, and how Penrith came to be one of the earliest adopters of electricity in NSW.

Go behind the scenes to hear some of the yesteryear stories of Penrith Council from a long-term former Penrith Council employee and local historian Jim Mason. These were the days before computers, when Penrith was still small enough for almost everyone to know each other, and the pay run was cash hand-delivered in an envelope by foot, bike and car deliveries around the LGA.

Chris Hewitt of the Nepean District Historical Archeological Group takes us back in time with a tour of some of the many artefacts held in the Group’s Collection. From bottles, crockery and farm implements to rare convict bricks – every object has a story.

Craig Werner: The History of Penrith

Local historian Craig Werner of the Nepean District Archaeological Society gives an overview of the history of Penrith City, from the first impressions of early explorer Watkin Tench, who described the Nepean River as being ‘as wide as the Thames at Putney’ in 1789, to the City’s subsequent growth from the time it became a municipality in 1871.

A sweeping overview of the colourful characters and places of Penrith during a time of rapid change from local historian Beth Moore of the Nepean District Archaeological Society, who shares her memories of a life lived in Penrith.

Did you know that South Creek was known to the local Darug people as ‘Wiannamatta’? That Charles Kingsford Smith used to give joy flights from Werrington Park in his biplane? That the Old Council Chambers in St Marys is home to a substantial collection of historical items and memorabilia from the St Marys region, including a collection from the Bennett family, whose wagons put St Marys on the map? Norma Thorburn of the St Marys and District Historical Society shares the history of St Marys, which became part of Nepean Shire in 1949.

Dr James Broadbent: A History of Glenmore House and the Mulgoa Valley

Hear about the history of one of the Penrith LGA’s earliest buildings, Glenmore House, from Dr James Broadbent of the Friends of Fernhill and the Mulgoa Vallery. Initially built in 1825 by Henry Cox, Glenmore House and its grounds were later substantially developed by Penrith’s first Mayor, James Riley.

Treasures of Penrith's Past

While filming the 150 Years speaker series, we captured some of the objects from the Treasures of Penrith's Past catalogue, which was created to celebrate 200 years of Penrith in 2015. Written by former research librarian and historian Lorraine Stacker, it describes some of the treasures that have been created over Penrith’s history – treasures representing various stages of Penrith’s past from pre-history through to the new millennium, and commemorates the achievements of the people who have lived in and around Penrith. 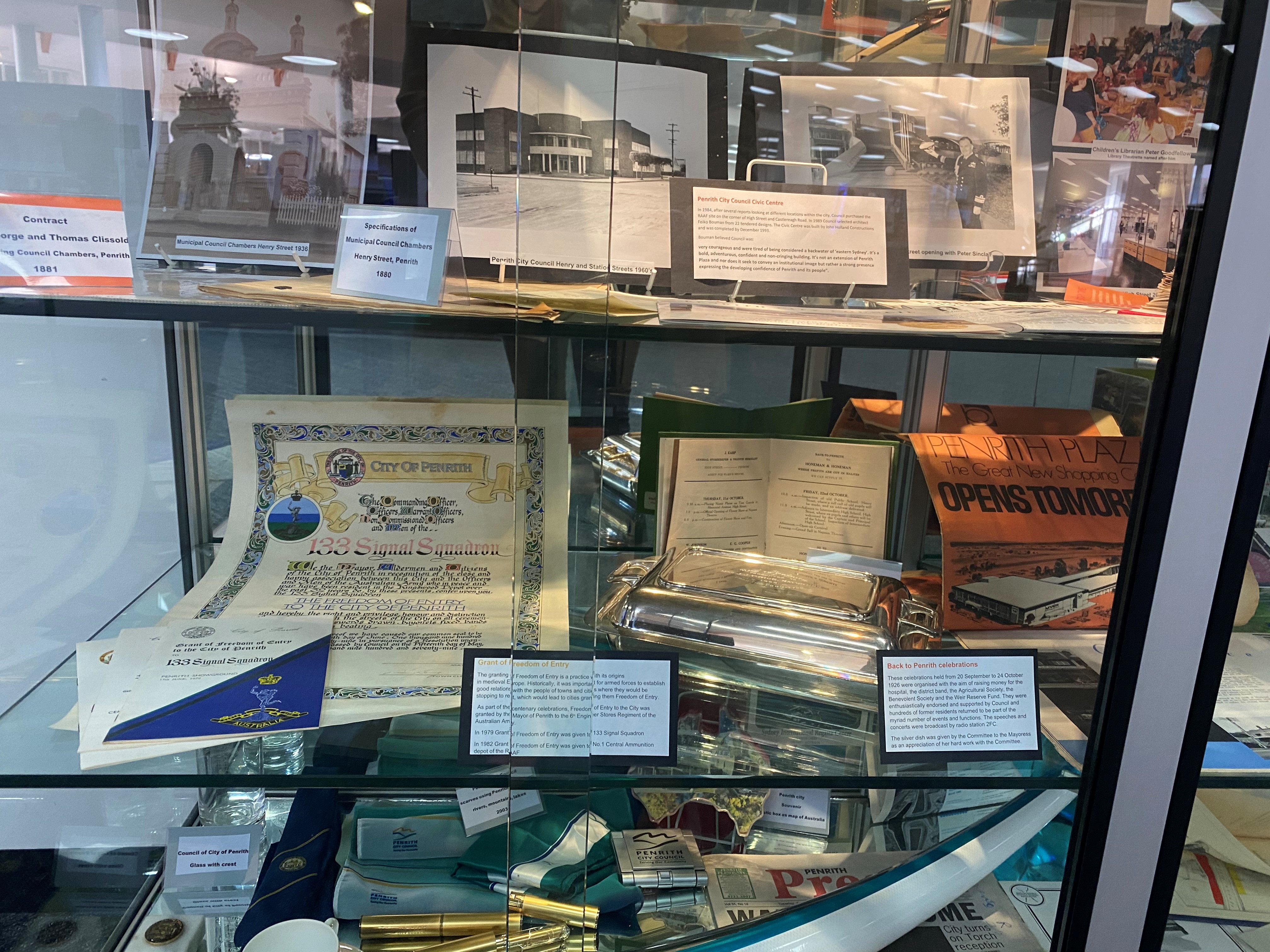 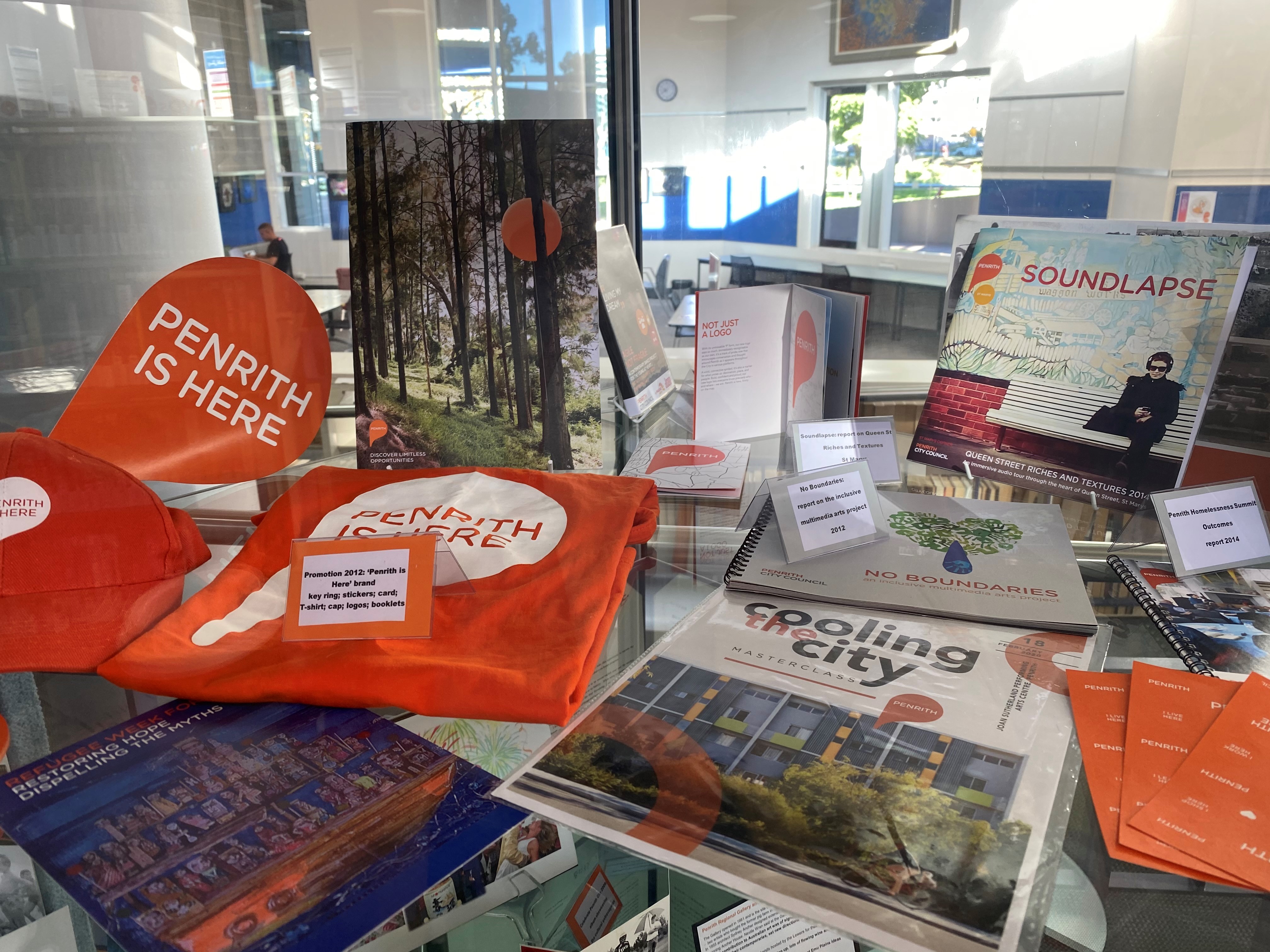 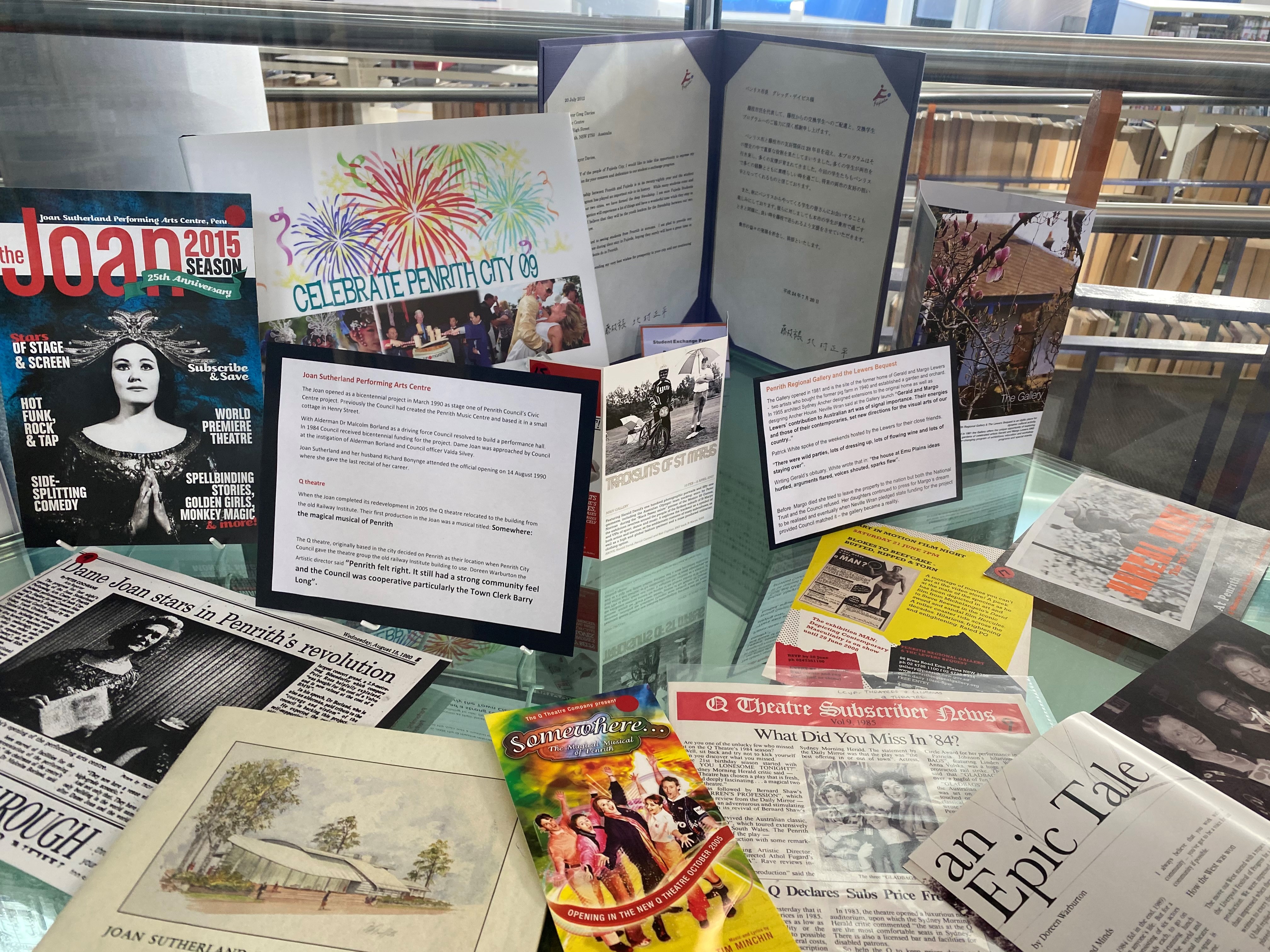 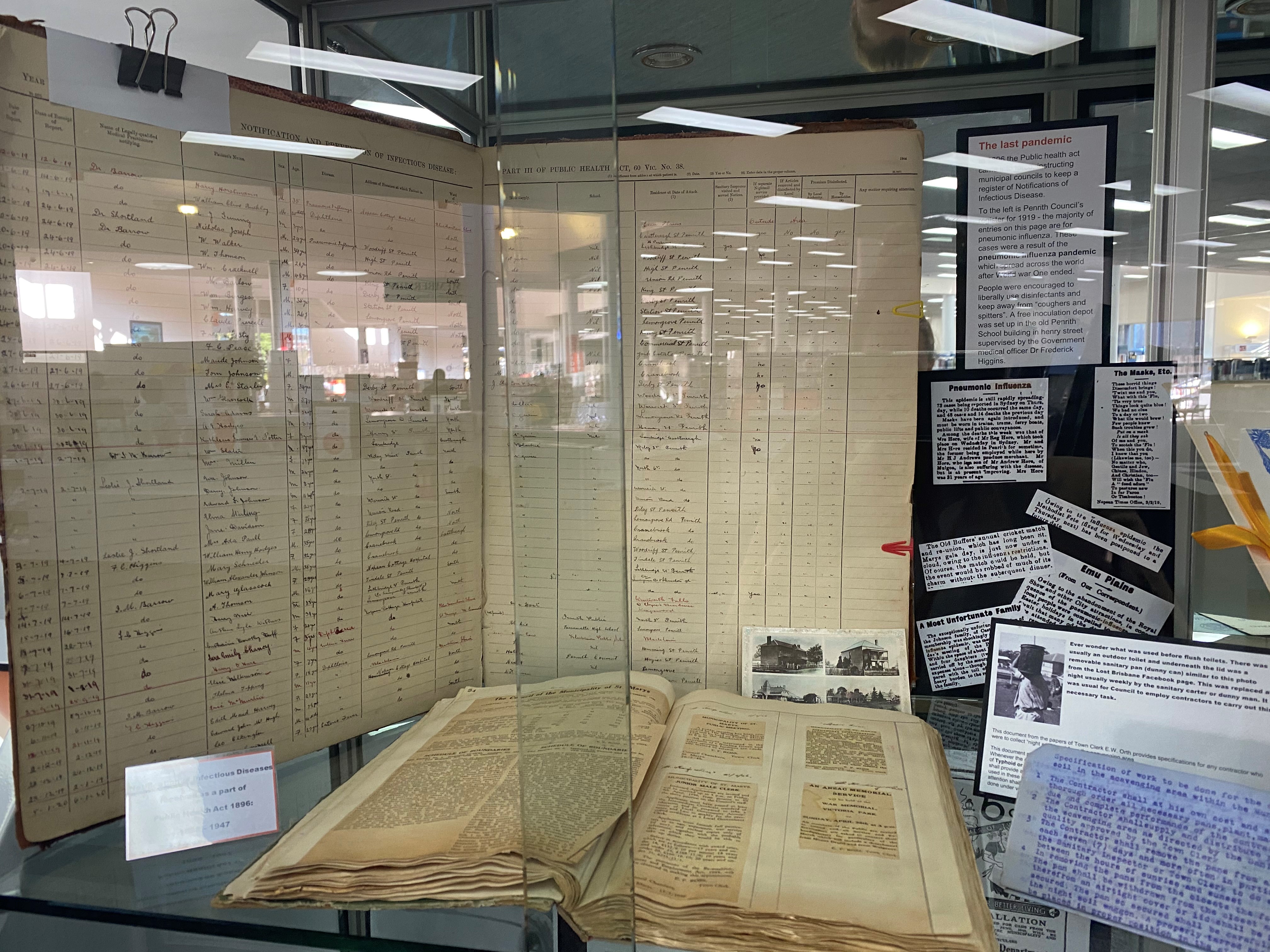 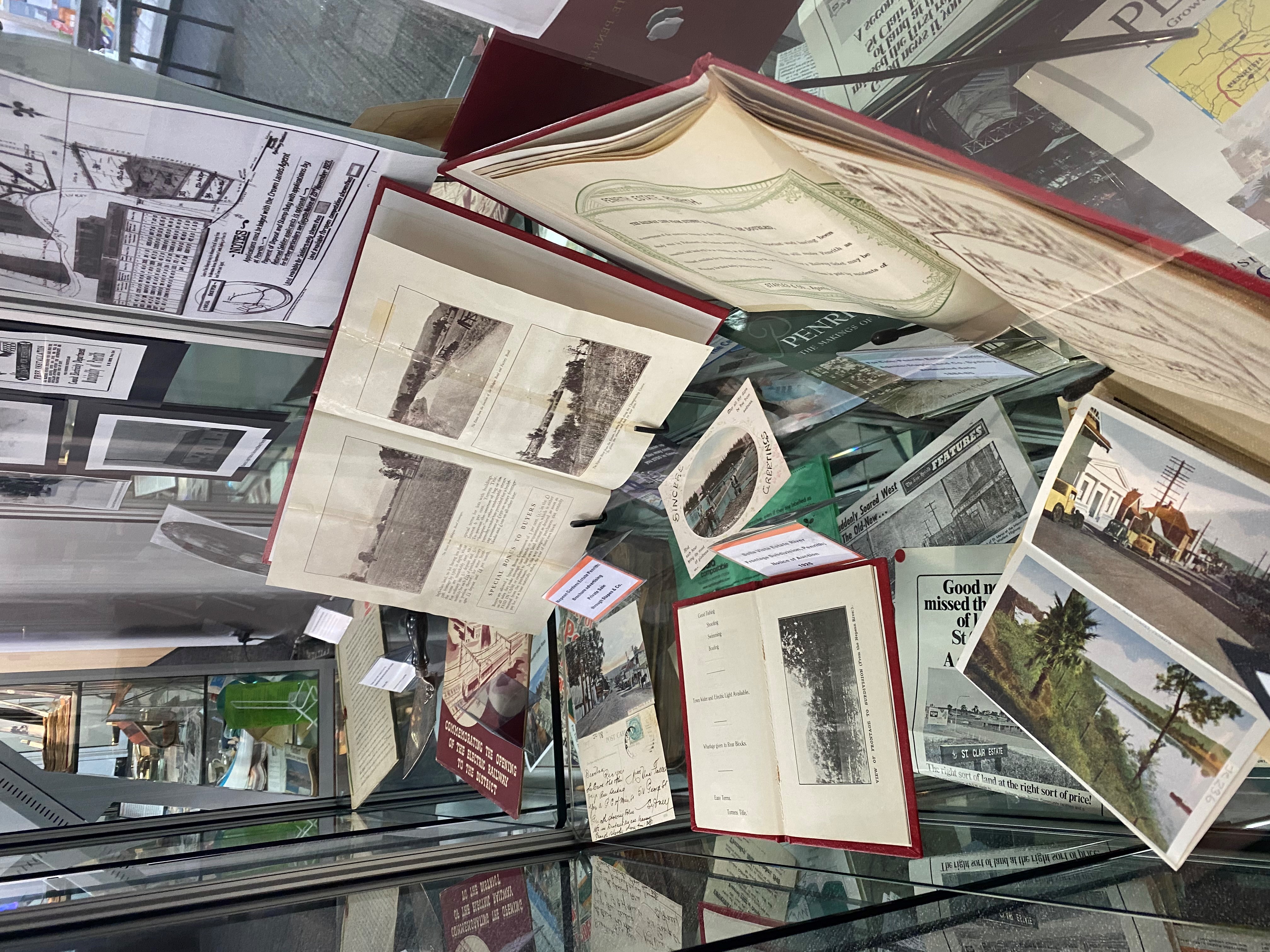 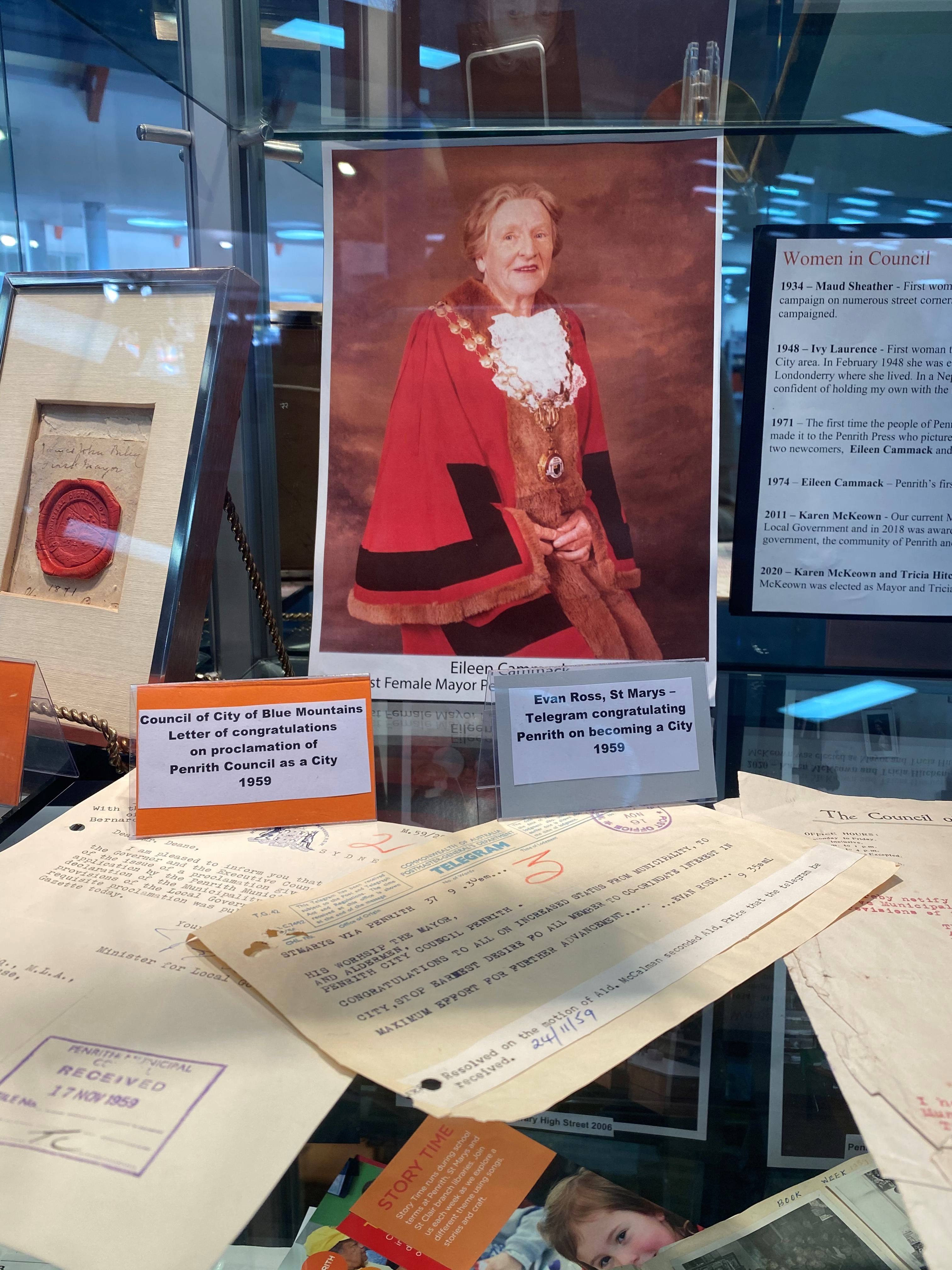 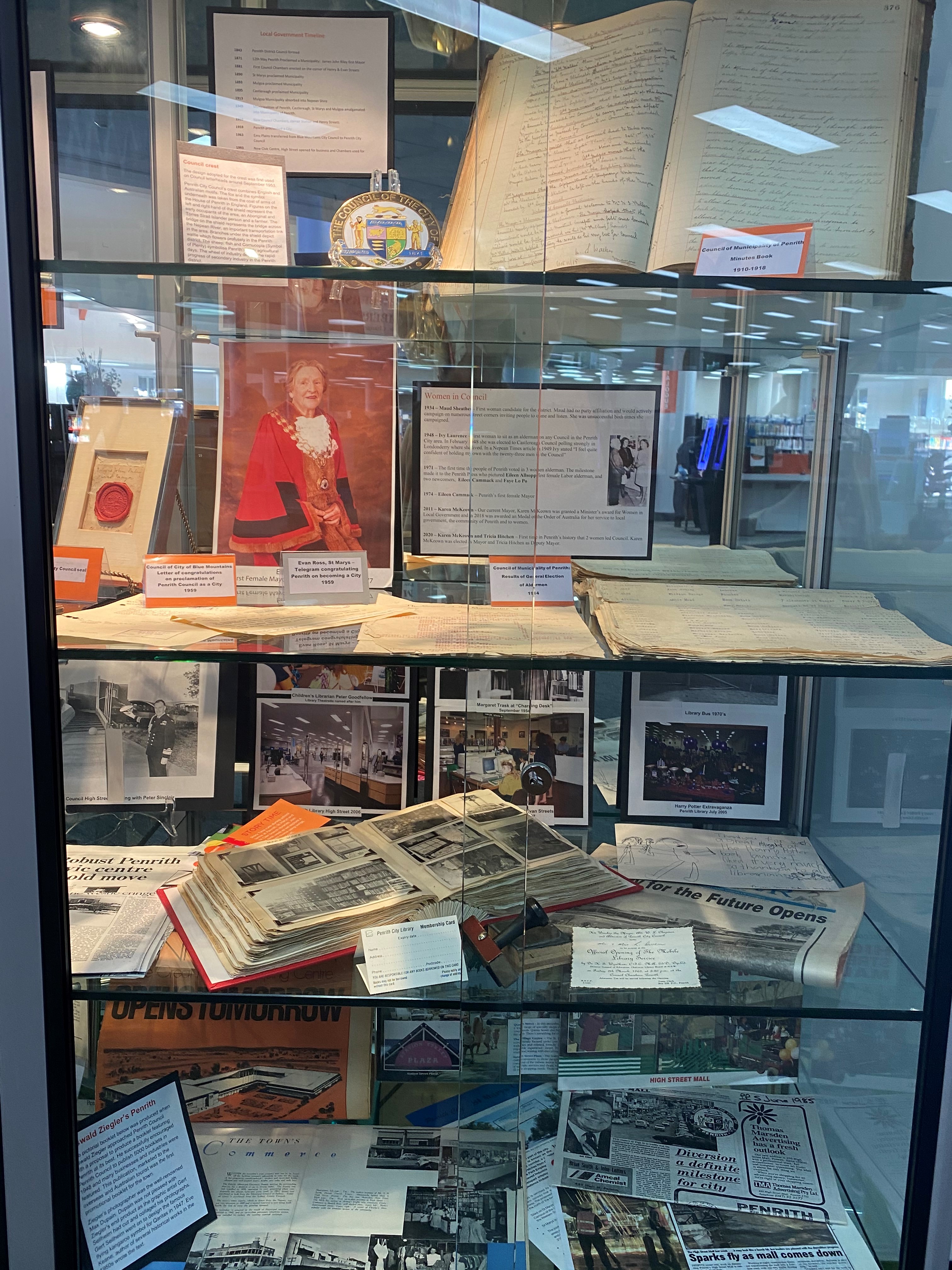