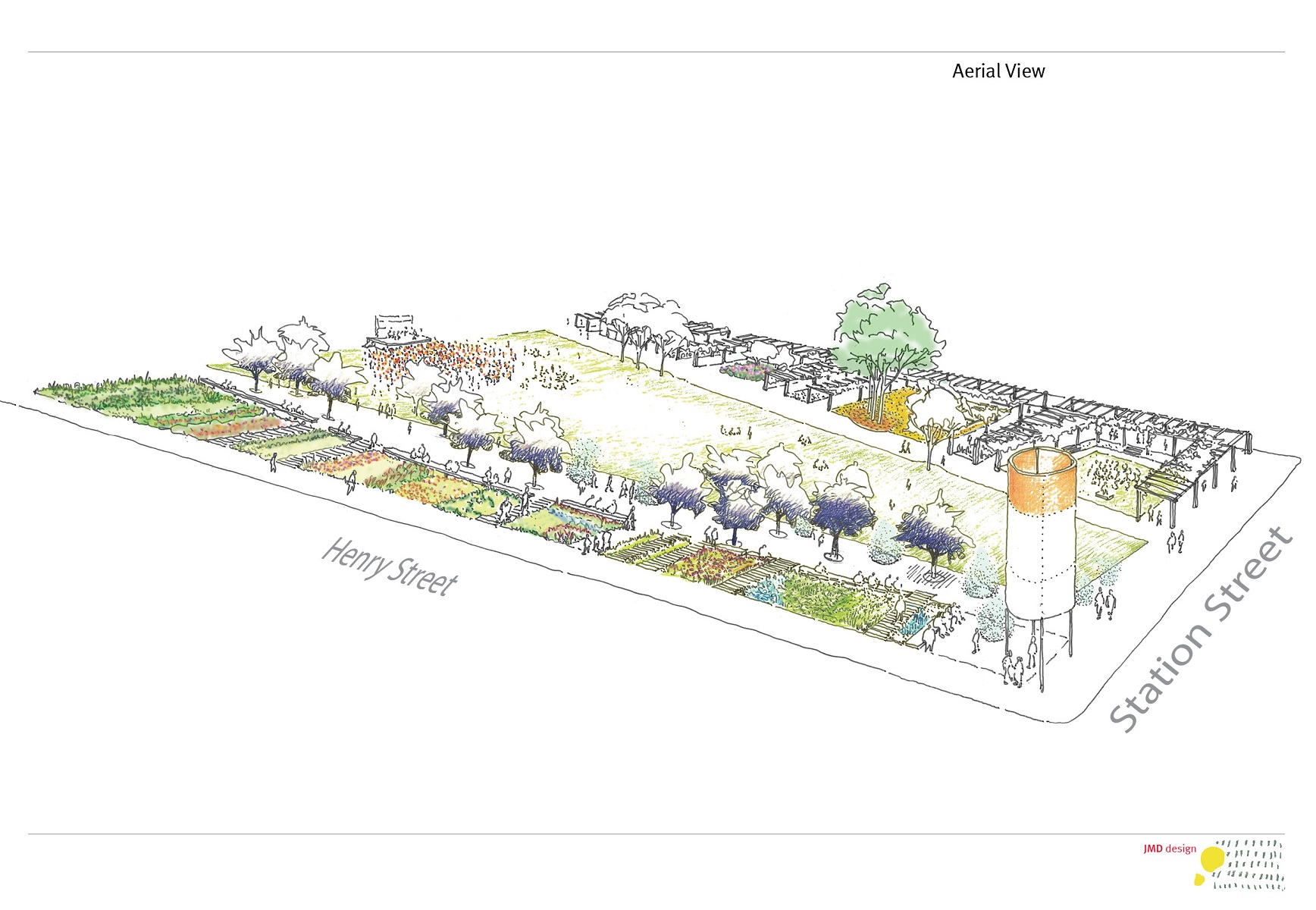 Penrith City Council is transforming the Penrith City Centre and unlocking the precinct to major opportunities with the delivery of a new City Park. At approximately 7,000sqm, City Park will be a significant open space in a prime prime location on the corner of Henry Street and Station Streets, Penrith.

City Park will be a vibrant, thriving, green space with something for everyone and plenty of opportunities to meet, retreat, eat, be active and celebrate together. These aspects are expected to strengthen its appeal as a destination for residents, workers, and visitors and stimulate the day and night time economy.

The final design for City Park is expected to be delivered in early 2021, but the recently delivered concept design gives us an exciting glimpse into the future of Penrith’s new urban park.

Why is Council building a City Park?

The creation of a City Park in the heart of Penrith was identified as a key component in shaping our City for the future back in 2006 and Penrith City Council has investigated opportunities for the site while the project was awaiting funding. City Park was formally endorsed as part of the Penrith Progression: A Plan for Action vision and since then Council has been consulting with the community on this project. It’s their shared ideas, thoughts and input that are shaping the design and delivery of this new open space in Penrith.

Where will City Park be located?

City Park will be located on the corner of Henry and Station streets in the heart of the Penrith City Centre, which will reinforce Penrith’s role as a major Western Sydney centre for business, employment and urban living.

Will the park be safe for the community to use and enjoy?

Council’s aim is for everyone to be and feel safe no matter where they are or what they’re doing across our City and this includes in the new City Park. Safety and security is being carefully considered and planned throughout the design stage to ensure that City Park is safe and enjoyable for all to use during the day and night. Council also aims to develop an Activation Plan for City Park to ensure a variety of uses in a vibrant, safe and beautiful space.

Will City Park have an all-abilities playground?

While City Park won’t have a playground, there will be several passive play and interactive elements for people all ages and abilities to enjoy. This includes several water features, sensory gardens and natural landscape features.

What are some of the benefits of City Park?

Leading cities around the world have large communal green spaces that provide a respite and reprieve from their surroundings. Think Hyde Park in the Sydney CBD and Central Park in New York. Smaller parks are also just as important and are known to deliver big benefits in small spaces.

In addition to adding beautiful, green open spaces into a city centre, small parks can encourage a healthy lifestyle, reduce heat by offering natural shade, create recreational opportunities, and attract people into the city to stimulate the local economy.

Where is City Park located exactly?

City will be located on the corner of Henry and Station streets in the heart of the Penrith City Centre. At approximately 7,000sqm, City Park will be a significant open space offering something for everybody. The City Park site is approximately 1/3 of the block, finishing at the Allen Park car park to the south and Gaymark Lane in the east.

What is happening to Allen Place car park?

A small amount of car spaces in the Allen Place car park will be part of the construction of City Park. While there is a small parking loss in the short-term, Council is delivering other car parks in the City Centre including the recently completed North Street car park and a new multi-deck car park at Soper Place which is due to start construction.

Where can people park their car to visit City Park?

Anyone driving into the City Centre is encouraged to download Council’s ParkPenrith app from the app store or play store. This free app uses and displays data from in-ground sensors and makes finding a parking spot much easier. For details on car park locations and time restrictions download the Penrith City Centre Parking Map: https://www.penrithcity.nsw.gov.au/services/other-services/parking/penrith-city-centre-parking-map

Will buildings be demolished to build City Park?

Several buildings on the site (corner of Station Street and Henry Street) will need to be demolished to create City Park. The buildings located on the site are owned by Penrith City Council. Council has been working with tenants for a number of years on the prospect of City Park and confirmed the timeline for development last September.

The concept design was delivered in mid-2020 and gives us an exciting glimpse into the future of Penrith’s City Park. The concept design incorporates the ideas and input provided by the community during consultation in 2019.The concept design proposes a beautiful, green open space that responds to the community’s request to bring nature into the City Centre. Key features include a variety of large shady trees, a sensory garden, water features and natural landscaping. There’s also plenty of space for everyone to meet, retreat, eat, be active and celebrate together with these aspects set to stimulate the day and night time economy by attracting locals, visitors and investors.

When will it be constructed?

How long will it take?

The works are due to start in late 2021, with a construction phase extending to 2023.

Can I still drive down Station and Henry Street?

Traffic access to Station and Henry Street will be maintained throughout the works.

What will happen if the works are delayed?

We don’t anticipate any significant delays. However, if the works are delayed, we will communicate with businesses and residents as soon as we can and provide regular updates on the progress of the works.

The concept design for City Park delivers on Council’s vision and our community’s aspirations for City Park to service many functions including the opportunity for future place activations, beautiful landscapes and showcasing smart technology and innovation. Importantly, the design includes an understanding of how future redevelopment surrounding the park can integrate.

The concept design for City Park delivers on Council’s vision and our community’s aspirations for City Park to service many functions including the opportunity for future place activations, beautiful landscapes and showcasing smart technology and innovation. Importantly, the design includes an understanding of how future redevelopment surrounding the park can integrate.

During the consultation in 2019, the community expressed a strong desire for City Park to bring nature into the city.  The concept design responds to this by increasing the tree canopy on the site from approximately 8% to approximately 30-40%, celebrating the existing tree on site and proposing a combination of endemic, ornate, and deciduous trees which enables use of the park through all seasons.

A variety of water elements including a rain garden, misting clusters and ponds are also featured to provide interactive opportunities particularly in warm weather. This increase in greenery, tree canopy and water elements will have a positive impact on mitigating the heat island effect and cooling our City.

The concept design features approximately 4,200sqm of green space and 1,400sqm of hard stand surfaces which can be used for a wide range of community, cultural and civic uses. There are spaces for quiet, small, and more intimate uses such as yoga or reading groups while also having the space to accommodate large scale community and civic events, such as cultural performances or movie screenings.