Council has identified agribusiness as a sector ripe with potential of the future of Penrith New West. 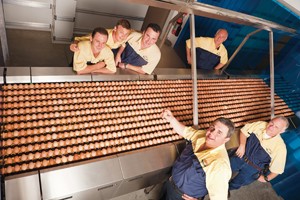 If you think of agriculture and Penrith as an industry of the past, think again. Our City’s current agricultural output is around $172 million and our proximity to the future Western Sydney International Airport and it’s 36-hour global market place represents a whole raft of new opportunities.

However, once the Western Sydney International Airport is operational, produce and other food products will be able to reach anywhere in the world in just 36 hours. Local fruit and vegetable growers, in particular, will have a competitive advantage in terms of the Asian market which is projected to reach 3.5 billion people by 2030.

Penrith will be the closest city centre to the future Airport, just 20 minutes by road, and connected by North South Rail from day one.

Our City is also well placed to tap into the agri-business precinct planned for the Aerotropolis, including DB Schenker’s recent commitment, and the food security research facilities that will form part of the Sydney Science Park.

In addition, Penrith is positioned between the airport and the Hawkesbury’s agricultural lands to the north and the Western Sydney University’s Hawkesbury Institute for the Environment – home to Australia’s National Vegetable Protected Cropping Centre set to play a key role in the future of Agritech.

And, as the gateway to Central West NSW, which produces 12% of the total gross value of agricultural production in NSW, worth $1.7 billion, Penrith is in a prime position to grow an increased agribusiness sector.

For investors, there will be no need to stray outside our boundaries. Penrith has 4,000 hectares of available employment land and can offer a strong existing industrial sector of manufacturing and freight and logistics industries including food manufacturers, construction and agricultural machinery and chemical and refrigeration manufacturers.

For more information on the potential to be part of a thriving Agribusiness sector take a look at the Western Sydney Aerotopolis Investors Guide.

Image: Eggs in many baskets - Penrith has a strong and varied agribusiness sector including Pirovic Family Farms which has been producing and supplying fresh eggs on a daily basis for over 47 years. Image: Pirovic Family farms website